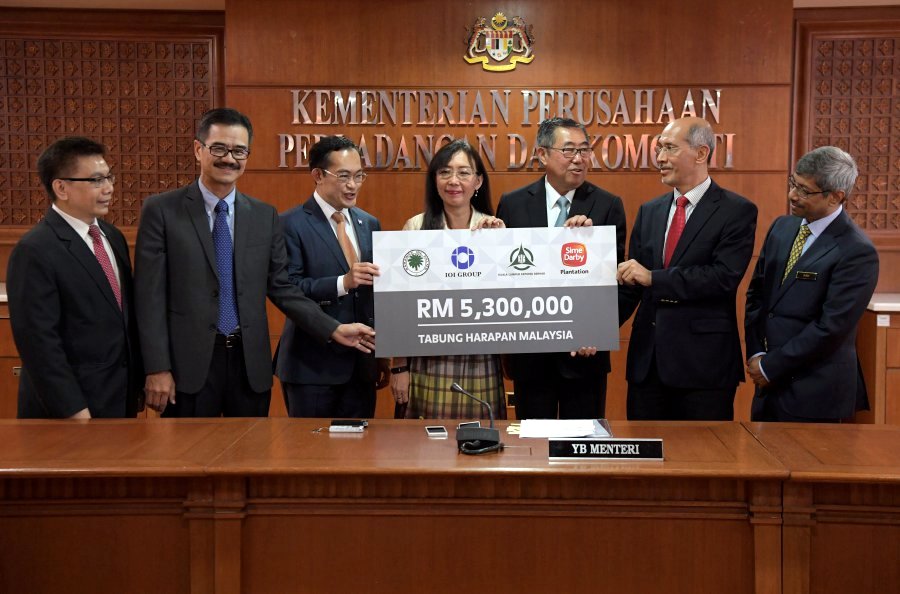 IOI Corporation Group chief executive officer Datuk Lee Yeow Chor said: “Coming from the leading palm oil companies representing one of the important pillars of the Malaysian economy, this contribution is seen as a fulfillment of our corporate social responsibility to the nation.

“The contribution is also a very meaningful gesture, symbolising our solidarity and support of the new government in resolving the many challenges faced by the country,” he said after the donation was handed over to Primary Industries Minister Teresa Kok today.

Kok said Pakatan Harapan (PH) was touched by the gesture of Malaysians and corporations who had donated to the fund.

“Today, we have big palm oil industry players joining the effort. Thank you for this sincere and exemplary gesture needed at a time when we are facing crucial times.

“I salute you for rising to the occasion and giving to the country without expecting anything in return. This action embodies the true Malaysian spirit.

Kok added over the years the palm oil industry had played an instrumental and key role in Malaysia’s economic development, particularly in terms of poverty eradication and socio-economic restructuring.

It has been a main contributor to the nation’s economy where the export value of palm oil and palm-based products in 2017 reached RM77.8 billion, an increase of 15.6 per cent over the total export revenue in 2016.

“I also urge those in the palm oil sector to work with the government in addressing various challenges, misallegations and unsubstantiated negative perceptions faced by the industry,” said Kok.